So I'm sorry that it took me a while to actually post something after saying that I would. Well this isn't a book that was on the list of upcoming reviews. This is because I just recently finished reading it. I felt I needed to talk about it first. So it's Wanted by Sara Shephard, the 8th and final installment in the Pretty Little Liars series.

About and Thoughts on the Book: 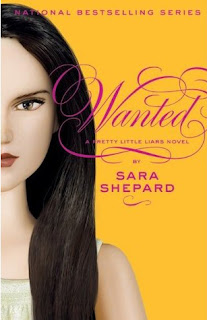 In Rosewood, majestic estates sprawl for acres, and Tiffany toggle bracelets dangle from every girl's wrist. But not all that glitters is gold, and the town harbors secrets darker than anyone could imagine-like the truth about what reallyhappened the night Alison DiLaurentis went missing. . . .


Back in middle school, Ali plucked Emily, Hanna, Aria, and Spencer from obscurity and turned them into the beautiful, popular girls everyone wanted to be. Ali was the best friend they ever had. But she also made them do terrible things and taunted them with their worst secrets. Now, three years later, all their questions about Ali have finally been answered and they can put this awful chapter of their lives behind them. Or so they think.
Not every story has a happy ending, especially when four pretty little liars have done so many wicked things. In the dramatic conclusion of Sara Shepard's bestselling Pretty Little Liars series, Emily, Hanna, Aria, and Spencer could get everything they've ever wanted-unless A has one more horrifying twist in store.
From B&N

I was so looking forward to reading this book. I had planned on getting it as soon as it came out, but sadly that did not happen. Why? I don't know. It took me forever to finally finish reading it, even though I began reading the preview on B&N. I really enjoyed reading this book, but it did let me down some. How could it not? It's the last one in the series, a series I didn't want to end.

If you haven't read this series, or if you're not caught up to the final book, than don't worry I don't plan on spoiling this for you. Or at least I hope I don't. The synopsis might have already done that. There were so many ways this book could go. If you've read this series, than you know that guessing at who A is is pointless cause it's not who you expect at all. This book held true to that. It kept the suspense and made sure to keep you on your toes. With all these books, you're never sure how the book will end. You just know that it will probably not be good, except for in one of them you think it ends good. Oh but you're wrong. You never know what's going on with all the characters. You're not always sure about Emily, or if Hanna will stay popular, or what Aria's parents are going to do to make her try to avoid them, or what Spencer and her sister will be arguing about. This is what I loved about this series. You may have been able to predict some things, but definitely not all. The more I read, the more I wanted there to be another, but sadly this series is over. I wish I could beg Sara Shephard to keep going with it. There

can always be a new A to torment the PLL. If you've watched the TV show, than I hope you agree with me that it doesn't come close to being as awesome as the books. That could just be me. Anyways, if you have yet to read this series, then I suggest you do so immediately!

Hope you enjoyed my first review post in weeks. I plan on keeping them coming.