Finally got to read this book. It's Catching Fire by Suzanne Collins.


Sparks are igniting.
Flames are spreading.
And the Capitol wants revenge. 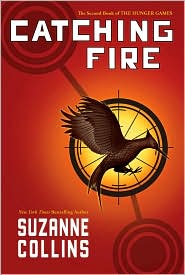 Against all odds, Katniss has won the Hunger Games. She and fellow District 12 tribute Peeta Mallark are miraculously still alive. Katniss should be relieved, happy even. After all, she has returned to her family and her longtime friend, Gale. Yet nothing is the way Katniss wishes it to be. Gale holds her at an icy distance. Peeta turned his back on her completely. And there are whispers of a rebellion against the Capitol - a rebellion that Katniss and Peeta may have helped create.
Much to her shock, Katniss has fueled an unrest she's afraid she cannot stop. And what scares her even more is that she's not entirely convinced she should try. As time draws near for Katniss and Peeta to visit the districts on the Capitol's cruel Victory tour, the stakes are higher than ever. If they can't prove, without a shadow of a doubt, that they are lost in their love for each other, the consequences will be horrifying.
In Catching Fire, the second novel of the Hunger Games trilogy, Suzanne Collins continues the story of Katniss Everdeen, testing her more than ever before ... and surprising readers at every turn.
From inside cover.

Where to begin, where to begin? All I can say is that I am simply amazed. I had liked the first book. I thought it was good. I thought it had the right unexpected twists and turns that made it a book you didn't want to put down, yet I still thought that it had all these twists but I still wanted something more from it. That if I had gone my whole life without reading it I would be fine. The second book took it up a notch. Collins throws in more twists and more turns. She shows the cruelness of the Capitol even more. You wonder how is Katniss suppose to stop a rebellion when she thinks there needs to be one. The Victory tour was meant to help save the lives of the ones she loves, by trying to prove to the Capitol and all the districts that she was so love crazy, it was her final act to keep the guy she loved, not a act against the Capitol. But Katniss doesn't know what it was anymore. She does know that all she wanted was to live. Yet she goes along with what President Snow tells her to do anyways, but it may be too late. Things have already happened that she can't change, and there's always that other twist that will make you cringe. I wondered as I read this book how any person could think this was fair. That sending children to fight to the death was an okay way to keep people from rebellion. That killing anyone who said something against the Capitol was right choice of action. That the Capitol should be allowed to thrive, while the districts starve and are basically slaves to the Capitol. I also kept wondering how the people in the Capitol got to live where they are. What made them so special to get to pretend that the Hunger Games are just that a game, a form of entertainment. I know there are countries out there that treat their citizens just as poorly, and I hate that this is how the world is, and maybe that's what the Hunger Games trilogy is trying to show. I just know that this book had me on my toes, not wanting to put it down, or miss a second of being able to read it. I can tell you that if you haven't read this book already then you will be truly surprised by what happens and the ending.
Posted by ALN at 4:16 PM