King of the Screwups

My sister is part of the Reading Bowl Team at her school, and they get a list of books that are nominees for the Georgia Peach Award. So whenever she gets this list I find myself checking off the books I've read, and it usually is a good amount. All the books on the list have to of been written in the year 2000 and on. So for the books I haven't read, I usually go and find them and try to read them. This book is on the list for next year, and so was Hold Still,  and North of Beautiful. The books have to be good to get on the list, and so far they have been. So this one one is called King of the Screwups by K.L. Going 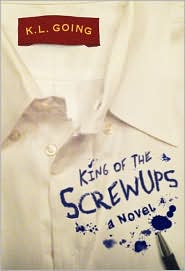 Liam Geller is Mr. Popularity. Everybody loves him. He excels at sports; he knows exactly what clothes to wear; he always ends up with the most beautiful girls in school. But he's got an uncanny ability to screw up in the very ways that tick off his father the most.
When Liam is finally kicked out of the house, his father's brother takes him in. What could a teenage chick magnet possibly have in common with his gay, glam rocker, DJ uncle who lives in a trailer in upstate New York? A lot more than you'd think. And when Liam attempts to make himself over as a nerd in a desperate attempt to impress his father, it's his "aunt" Pete and the guys in his band who convince Liam there's much more to him than his father will ever see.
From B&N

So Liam doesn't really believe that he can do anything and not screw it up. He tries to be a nerd, dress like one, be smart like, but it doesn't really work out for him. The popular people still like him and think that he's really cool. So in Liam's opinion he once again screwed up. He wants to be a nerd because his father is a genius and has been named Business Man of the Year many times. He puts Liam down for everything he does. He doesn't care that he made the varsity basketball team when he was in the ninth grade. He only sees what he's messed up, like getting drunk, hooking up with girls, getting a DWI and getting his license taken away, and failing classes. He does everything to show Liam that he's not going to amount to anything. It's not true, Liam is awesome at modeling, his mother use to be the top supermodel, and she taught him everything about fashion. He helps his uncle's friend set up a shop window to get more customers, and it works. But Liam's father thinks modeling is a waste of time, and that Liam can never go into his mother's old career, so Liam thinks that he's even screwed that up. I really could not stand Liam's dad. He's probably one of the worse father's in a book I've read. This book has flashbacks thrown in at the beginning of some chapters. It shows that Liam father's has been treating Liam the way he does since he was a little kid, telling him a B was not good enough and that he shouldn't be going to fashion shows. Liam's Uncle Pete or Aunt Pete as Liam calls him and his friends are some unique characters. I liked Eddie the best, he could be really funny and so was Pete. Darleen, Eddie's cousin, was someone who saw what you were on the surface and labeled you off from that. She hated Liam in the beginning because she saw him as Mr. Popularity a name his father gave him and not meaning it nicely. Liam tried through out the book to show her that he's not Mr. Popularity, but maybe he was really trying to for once impress his father and show him he didn't really screw up everything. The only opinion Liam needs to care about is his own, and how he sees himself. I thought this book was well written. It was funny in parts and touching in others, some parts I wanted to yell(mostly the parts that included the father), and at the end I was happy with how it turned out for Liam. I still think the end needs something more. I felt like it just ended, like she rushed to get to the end. Overall, a really good read.

Great review...hadn't heard of this one before but I added it to my TBR list, thanks for the rec!