So I signed up to be part of the Traveling ARC Tours, and if you would like to sign up as well there's a link on the left sidebar. It's says what it is, just click on the picture. So the first book I signed up to be a part of is The Krybosian Stairpath by S.R.R. Colvin. 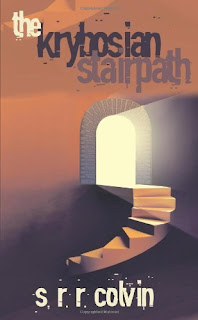 Enter a world of wonder deep inside the earth as 11-year-old geologist Madison Terrence follows her pet gopher down a stairpath portal she discovers in her family’s cavern.
When she descends the Krybosian Stairpath, a mystery from her family’s past begins to unravel.  She soon realizes her arrival in the interior world of Krybos is no accident. Madison discovers that she’s been pulled into a sinister plot to destroy the most beautiful place she has ever seen.
Join Madison, her younger brother, Mica, and her best friend, Onyx,  as they follow the Krybosian Stairpath into the depths of the earth to explore the wonders and dangers that await them in the hidden world of Krybos.
From srrcolvin.com

I was able to email the author after reading this book, and she told me about her journey with writing this book. She has been writing and revising it for ten years. She told me how she didn't want it to have too many things like Harry Potter in it. She also told me she wanted it to be something her grandkid could read and not get bored with. I think she achieved both. It wasn't boring and didn't have too many complicated plot twists that would make a kid put it down. It reminded me a lot of the Magic Treehouse series from what I remember of reading those books. I actually didn't expect what happened. From the synopsis I read, I thought it would just be Madison who went on this adventure, but her little brother and best friend also joined her. It's a wonderful book for preteens and kids. It would be a great book to suggest to a kid who is reluctant to read. It's about an adventure, what kid doesn't love going on adventures. I know I did. My sis and I would always hang out in the woods behind our house pretending we were somewhere else.  This book took me back to that, and I think any kid would want to journey to the world of Krybos with Madison, Mica, and Onyx.