Such a Pretty Girl

Just finished this one, it's Such a Pretty Girl by Laura Wiess. 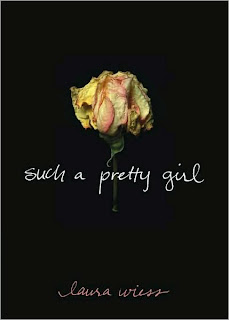 They promised Meredith nine years of safety, but only gave her three.

Her father was supposed to be locked up until Meredith turned eighteen. She thought she had to grow up, get out, and start a new life. But Meredith is only fifteen, and today her father is coming home from prison.

Today her time has run out.
From B&N

Meredith's father use to be a respected man in their town. He use to coach little league, then he got put in prison because of Meredith. Because Meredith was sent to the hospital and told them everything she could remember even though her mother told her not to. Her mother wouldn't listen to the truth. She wanted to live in her delusional world that her husband actually loves her, actually wanted to be with her, and not their daughter. The truth comes out about Meredith's father and now the whole town knows and hates him, except Meredith's mother. The one person she should definitely be able to count on. Meredith was suppose to get to be able to be far gone by the time her father got out of jail, but they let him out on parole early. She thinks that maybe she can handle it if her boyfriend, Andy, a boy also abused by her father is there with her, living in the condo close to hers. But his mother decides to go to Iowa to get help for Andy with his paralysis. Now Meredith decides that she wants real justice, she wants her father to go to jail for good. She knows he'll try again, it's just a matter of time.

This is a short novel that can be easily read in a matter of hours, which is exactly what I did. It's wonderfully written and fast paced. I couldn't believe the way the mother acted in this novel. She wanted to be with her husband more than she loved her own child. I also couldn't believe that they were allowing Meredith's father anywhere near her. He wasn't suppose to be alone with Meredith, but her mother never listened to that rule. She hardly cared about her own daughter. She acted more jealous of her than like a parent. I've read books and watched movies where this sort of thing happens. Where wives will believe anything their husbands tell them because they can't stand to be without them. This book helped me to further realize how much the justice system needs to be improved. Yet the ending is really purely stunning. Not at all what I expected. I did expect something to happen similar to what happened, but it still caught me off guard. It's an excellent read.

Email ThisBlogThis!Share to TwitterShare to FacebookShare to Pinterest
Labels: coming of age, religious

I just love YA books! Thank you for posting this. Gotta add this to my TBR! :)

♥.•*¨Elizabeth¨*•.♥
Can Alex save Winter from the darkness that hunts her?
YA Paranormal Romance, Darkspell coming fall of 2011!

Great review, I've seen this one around quite a bit and really like the cover.

This book sounds really good. I love the review, and the cover is nice also. New follower.

Interesting book over here and I love the way you caught our attention about the ending. It's definitely something that I'll read ASAP. Too bad I'm away on a trip but I hope I'll be able to find it as an e-book on All you can books. Thanks for the review.

Such a pretty post and book sounds great, I love reading this one..domain registration india

Hi my friends.hope you will visit my blog enjoy the information.please click the adsense in my blog for more information http://tourismopportunity.blogspot.com/

I love how you picked up the nuanced themes in the book, absorbed the lessons, then parsed them out for your readers. You are amazing and I would love it if you would review my book, Faetal, which is available on Amazon. You can download it for free 12/16/12.

Have a lovely day!
Siobhan Shier

:O i so want to read this bookd! it's different from what i read, which are dystopian books, sci-fi fanstasy. Such a pretty girl reminds me of something that Jodi Picoult would right! Real life stories about families that aren't always talked about. it's because people are ignorant or victims don't want to speak up! i will definitely buy this book! i'm all about woman rights. thanks for the review!