So the book I finished yesterday is Dancing in my Nuddy-Pants by Louise Rennison. It's the fourth one in the series Confessions of Georgia Nicolson. 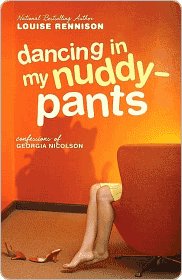 Georgia thought she had put her "red-bottomosity" to rest when she finally chose Robbie the Sex God over Dave the Laugh. Anyway, Dave the Laugh is now dating her friend Ellen (which didn't stop Georgia from snogging him at a party...)
But when Dave breaks up with Ellen and the Sex God is never around, Georgia doesn't know what to do! As always, in Georgia's life, nothing ever turns out as planned!
From B&N

So I have been reading this series for a couple of years now. I would be farther through it if I could of gotten the next books when I wanted them. My library only has the first one, and every time I go to buy it, the bookstore doesn't have the one I need. It took what seemed like forever to get this one.

Louise Rennison knows how to make you laugh. If you're ever in the need of a good laugh, pick up this book or the others. I have a hard time keeping myself from laughing out loud. Sometimes I do, and that causes me to get weird looks. If they were to read this book, they'd understand why I was laughing. This series is about Georgia Nicolson and told in a diary format. She's British, so some of the terminalogy she uses I didn't always understand, but there is a dictionary included in the back, and it comes in handy. She's someone who is never afraid to do what she wants, even with the consequences that come with it. She'd convinced her friends, the Ace gang, to wear the required berets at her school as sausges on their heads, and then as gloved animals. During the winter she convinced them to wear the gloved animals with sunglasses, so to prevent snow blindness. Like I said this book is hilarious. Robbie is the guy Georgia starts to like in the first book, Angus, Thongs, and Full-Frontal Snogging, but he's three years older, so he said that they couldn't be together. Later on he changes his mind, after Georgia dated Dave the Laugh, who understands her humor more, and they start dating. Now Ellen, a member of the Ace gang is dating Dave the Laugh, and Georgia finds herself thinking about Dave. She also tells Jas, Georgia's best friend, that she snogged Dave the Laugh at a party when he first started dating Ellen, and she was going out with Robbie. Of course Jas gets mad, and it takes Georgia a while to convince her to be her friend again. So in this book Georgia has a dilema, she keeps questioning whether or not she likes Dave the Laugh, and what's going to happen when Robbie goes on tour with his band The Stiff Dylans. It's not a book that is going to make you cry and you may think of it as childish, but I still like these books. I'll keep reading them because they make me laugh.

stopping by from the Hop ! :) and now I'm a new follower , looking forward to your future posts.