So this is my first review post in a while that has been about a book that I didn't read for Traveling ARC Tours. I do love the books I get from them, but I have lots of others I want to read too. Anyways this is Flowers For Algernon by Daniel Keyes. 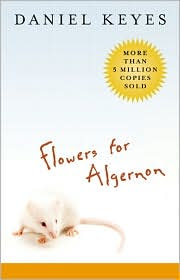 Charlie Gordon is about to embark upon an unprecedented journey. Born with an unusually low IQ, he has been chosen as the perfect subject for an experimental surgery that researchers hope will increase his intelligence-a procedure that has already been highly successful when tested on a lab mouse named Algernon.
As the treatment takes effect, Charlie's intelligence expands until it surpasses that of the doctors who engineered his metamorphosis. The experiment appears to be a scientific breakthrough of paramount importance, until Algernon suddenly deteriorates. Will the same happen to Charlie?
From B&N

So this is not the typical book I would pick up off the shelf. But I've heard of it before, and thought it would be interesting to read. I was not disappointed. It's not a YA book in my opinion, but it is considered to be one, but I didn't think that it was. So I wouldn't recommend it if that's all you read, but it is something I think anyone who wants to read would enjoy. I loved the fact that as Charlie progressed you saw that through the writing. It's told from first person point of view by way of Charlie's progress reports, which were like his diary. He told you everything even when he didn't know how to spell it or what exactly was going on. I found what this story was about intriguing.  I thought it was interesting that the author chose the topic that he did for this book. What happened in the ending disappointed me, but I thought it was a good ending to an excellently written book.


So I give this one:
LI - Loved It! It's a definite read! You should grab this book before it goes running off the shelf!


So ends this one,

I loved that book in 7th grade.

This actually is considered a YA book, as it is in most middle school english requirements. I remember reading a shortened version with my son. It was really hard for both of us, because he is severe learning disabled and has very poor short term memory.

I didn't know that a lot of middle schools required it because mine did not. It didn't seem like a middle school book in my opinion at all.