This is a book I anticipated since I found out there was going to be sequel to Hush, Hush. It's Crescendo by Becca Fitzpatrick 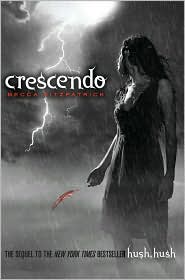 Nora should have know her life was far from perfect. Despite starting a relationship with her guardian angel, Patch (who, title aside, can be described anything but angelic), and surviving an attempt on her life, things are not looking up. Patch is starting to pull away and Nora can't figure out if it's for her best interest or if his interest has shifted to her arch-enemy Marcie Millar. Not to mention that Nora is haunted by images of her father and she becomes obsessed with finding out what really happened to him that night he left for Portland and never came home.
The farther Nora delves into the mystery of her father's death, the more she comes to question if her Nephilim blood line has something to do with it as well as why she seems to be in danger more than the average girl. Since Patch isn't answering her questions and seems to be standing in her way, she has to start finding the answers on her own. Relying too heavily on the fact that she has a guardian angel puts Nora at risk again and again. But can she really count on Patch or is he hiding secrets darker than she can even imagine?
From B&N

Warning!: This review may contain some spoilers, so don't read it if you don't want to know something that happens. I don't mean to have them in there, and there are not a lot, but I am warning you for a reason.

I read this as part of the Sneak Peak with B&N. To be honest I didn't follow the schedule they put up on the boards. How could I with how anxious I was to read this book. I didn't read all of it exactly on the day I finally got it in the mail. I at least waited to find out what the schedule was, but after I did, I didn't follow that schedule. So it was really pointless of me to even wait really.

It starts the summer after all that had happened in the end of Hush, Hush. I loved that Nora and Patch were finally together, but I am quickly crushed as much as Nora when they break up. I am as devastated as Nora is. I wanted this book to be all about them being together, but my dream is dissolved all too quickly. But it's not Patch who breaks up with Nora, she breaks up with him. That I didn't expect, but Nora has her reasons. She believes she is protecting Patch from the archangels, she believes she's protecting herself as well. A lot of what happens in this book is unexpected. Marcie, Nora's nemesis in the first book, is in this book more than the last. Which makes me want Nora to smack her or something even more, because that girl does not know how to be tactful or even remotely nice. She's the worse to Nora, and it's worse in this book than it was in Hush, Hush. Even more horrible is that Marcie starts hanging out with Patch. Do you know how many times I wanted to scream because of that? A lot!  Nora also starts thinking she's seeing her dad everywhere. Is it really him or someone out to get her? Like I stated before, so much of this book is unexpected, but something not unexpected is a cliffhanger. Nothing makes you want to read the next book in a series more than a cliff hanger. I cannot wait for Tempest. To be honest I was a little disappointed with some of this book. I wanted more Patch, but he was not in it as much as you would think. I liked that everything is explained in the end, but there is that cliffhanger that left me with even more questions than I had before.