Once again I joined in on another tour through Traveling ARC Tours. I must say I really like doing ARC tours. So the one I joined in on this time is Indigo Blues by Danielle Joseph. 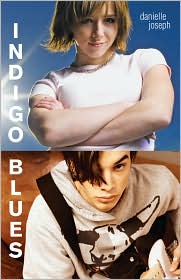 Even though you tossed me away, I'm here to stay.Oh, Indigo, how could you let me go . . .-from "Indigo Blues" written by Adam Spade, performed by Blank Stare
Indigo:
I never asked to be famous—or infamous. Such is my fate for briefly dating (and dumping) Adam Spade. Yes, the Adam from the indie rock band who wrote "Indigo Blues"—the song that gave the band overnight success, propelled them to New York City, and stole my precious anonymity. Now I'm pawed by fans, stalked by reporters, and pegged as a vicious heartbreaker. And Adam is still calling me. Doesn't he have better things to do?
Adam:
With a hit single and a promising career, I should be on top of the world. People on the street are beginning to recognize me, which is cool. And scary. The band is counting on me to write another hit, but I can't stop thinking about Indigo. Why won't she answer the phone?
From B&N
I was kind of surprised by this book. I expected something different after reading the synopsis. I'm not saying that it's bad or that it's the most amazing book either. It's good, though. When I read the synopsis, I automatically thought of a book I've read before where the same thing happens. You probably know the one I'm talking about if you have read it. It made me think of Audrey Wait! by Robin Benway. There are similarities, but in Audrey Wait! you don't get the point of view of the guy like you do in Indigo Blues. I expected this to focus more on the fame that Indigo was getting. I thought she'd get hounded more by the press, but to me people only thought it was her by her name. It's really unique. Other people knew because they knew her and that she had dated Adam. I wanted there to be more about their relationship, to explain more about what happened, but it didn't tell everything I felt it should about it. I also didn't care too much for the ending, to me it just ended. I never have liked that, and I want more clarification on what's going to happen in the future with them two, this will bug me for a while now.
Overall I give this one:
OK - It was okay. Not bad, not excellent.
It seems like it should be given more than that because I did find it to be a good read, but I did want more from it.
Alisha
Posted by ALN at 12:13 PM