So I read this book a while back, but like a lot of books I've read over the past months, I haven't had the time to post a review for them. There's no time like now to finally get a review in is there. So for this one it's Vanished by Kate brian the 12th book in the Private series. 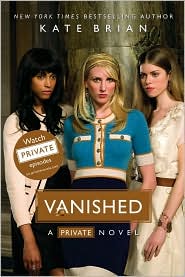 Against all odds, Reed Brennan re-established Billings as an underground literary society. She and the new initiates created a glamorous secret headquarters and were ready to show Easton Academy that even though Billings House is gone, the Billings Girls are stronger than ever. But before Reed had a chance to revel in her success, something horrible happened:
Noelle disappeared.
Now Reed has no idea who wants to hurt Noelle or why, but it's up to Reed to save her. As the clues build up, the clock ticks down, and Reed fears that unless she finds Noelle soon, she'll lose her friend forever....
From B&N

These books are all about the mystery. They keep you guessing till the very end and sometimes even after that because it's never really over. Every time Reed thinks something good has finally happened in her life and all the drama is over, something else happens and she is again keeping secrets from her friends and boyfriend. She thinks that she has to handle everything on her own. Yet in this one, Josh is there for her. She has help, but will she take it. She can't let anyone know that Noelle is gone. The kidnappers keep sending cryptic texts telling her that if she tells anyone that Noelle will be hurt. Sometimes they demand her to complete tasks, such as get a letter from Noelle's grandma who's in Europe that excuses Noelle from school. Something about this seem not right, something about this makes it seem like these kidnappers don't just want money. They could be anyone and it's up to Reed to find out who.

Like the other books in this series, it keeps you on your toes till the end, and definitely after that. You may think you know what's going to happen or who committed the most recent crime, but then there's a twist that throws your earlier assumptions out the window. You want to keep reading even after it's over because you know something else has to be thrown into the mix to make it even more of a mystery. One of my few problems is that whenever I read these books there's always a cliffhanger at the end and then I have to wait months to get the next book and I sometimes forget what all happened in the last one. That's true for any book in a series, but with these it always seems like there's a cliffhanger, and they're not that long so when you get to the end you immediately want to have that next book in your hand. I do think that some parts of the book tend to be a little slow, but it's not enough to keep you from continuing to read it and possibly get done with it in a day or less. I know I usually finish them pretty quickly even though I wish I didn't so I didn't have to wait even longer for the next one. Yet what happens in the end of this one throws me for even more of a loop, I can't believe and it kind of disappoints me. Maybe it's just me but I didn't like the course this series has now taken. I plan on getting the 13th book in the series, but I haven't had time to go to a book store and get it or the other multitude of books on my forever growing "to be read" list that never seems to get any shorter. I am still trying to keep from purchasing books offline even though I get them used and for cheaper. This is all due to the fact that I'm trying to prove I don't have an addiction. Anyways if you like mysteries and you like the Pretty Little Liars series then I suggest you read this series. I think it is one that you will enjoy, especially if you like the suspense. Yet it's not a book that's a must read, which is one of the reasons why I haven't gotten the next one.

Alisha
P.S. It's becoming increasingly difficult to stop myself from buying books online especially since I keep finding books I want to read and the library doesn't have them and the preview isn't long enough. But I will prevail!!!