Wow! How long has it been since I've done one of these posts? Well this is the first one in July, so a while. Sorry. So to kick start this thing again, I'll be talking about Just Like That by Marsha Qualey. In case you have never seen one of my From My Bookshelf post then I think I should explain to you what it's all about. It's a weekly post I do on either Tuesday or Wednesday but have now changed to Thursday. I talk about books that I haven't read that recently or might of not written a review on at all except for this post. Most of the books are literally from my bookshelf, but I do plan on talking about books I got from my local library. So on to Just Like That. 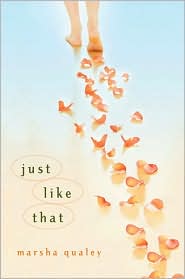 Things change so suddenly. one day Hanna has a long-term boyfriend; the next, she realizes she doesn't have strong feelings for him and breaks up with him. one day Hanna trusts her two best friends completely; the next, all of that trust is toppled. And then Hanna finds herself the bearer of a major secret: she was the last person to see two teenagers before they died in an accident on the icy lake. she can't tell anyone, so when Hanna finds herself drawn to will, the elusive boy she's noticed around town, the kind of boy who'd increase any girl's pulse, she doesn't hold back. what she learns about him will astonish her. but what she learns about herself—her friendships, her family, her life—will affect her far more.
From B&N

I suspect that sometimes strangers think I'm a bitch.  I can't say for sure though because I never ask strangers what they think.


This is book that I read over 2 years ago. It was actually 2 years on July 10th. Why do I know this? Well this was another book that I wrote in after I read it. The exact date. This doesn't include the time I reread it. Yep I liked this book so much I actually reread it last year. It was not like I expected it to be. It was amazing book that tells of how things can change just like that. No warning and everything can change. That's what happened with Hanna. She didn't know she'd be the last person to see two teenagers alive, but she was, and she can't help thinking that she could of done something. I guess we all think that at some point in our lives. But this book isn't just about that one part, more happens that Hanna doesn't see coming, and it changes her life completely. I really enjoyed reading this book, even though I was disappointed with some things that happen. In the end it seems like things will go my way, but then it ends with not really telling you what's going to happen. It makes me want another book, but this is one of those books that doesn't need to be turned into a series.

Will you go find out how your life can change just like that?

And a little reminder that my Fantasy Character Cast contest ends on the 30th, so please enter and get your pics in soon.
Posted by ALN at 10:22 PM

Email ThisBlogThis!Share to TwitterShare to FacebookShare to Pinterest
Labels: coming of age, From My Bookshelf

hey nice read. Yes, our life would be better if some things happened with previous announcement. But we will miss the thrill.

Alisha I have selected your blog for 'The Versatile Blogger' award. Please check my blog for more info

So I just happened upon your blog, and I was excited to see this review; I don't know many people who have read this book and it made me happy to see someone else promoting it. :]