This is the book for my Blog Fest Giveaway, and it's Old Magic by Marianne Curley. 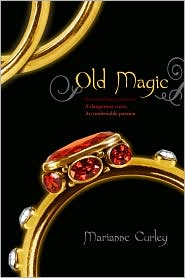 Jarrod Thornton is mesmerizing,
but Kate Warren doesn't know why.
The moment the new guy walks into the room, Kate senses something strange and intense about him. Something supernatural. Her instincts are proven correct a few minutes later when, bullied by his classmates, Jarrod unknowingly conjures up a freak thunderstorm inside their classroom.
Jarrod doesn't believe in the paranormal. When Kate tries to convince him that he has extraordinary powers that need to be harnessed, he only puts up with her "hocus pocus" notions because he finds her captivating. However, the dangerous, uncontrolled strengthening of his gift finally convinces Jarrod that he must take Kate's theories seriously. Together, they embark on a remarkable journey — one which will unravel the mystery that has haunted Jarrod's family for generations and pit the teens against immense forces in a battle to undo the past and reshape the future.
From B&N


Sorry that this took me a while to finally post. It's here now, and just in time for my giveaway.


So this was a book I got a while back, and one that I had not heard of until I saw it on the shelf at the bookstore. The synopsis drew me in. I can honestly tell you that I did like it, but it wasn't like I expected, which is a good and bad thing.


Kate is a witch, and the her whole town knows or at least that's the rumor. They know that her grandmother is one because she owns a shop where she sells things to a bunch of tourists that kind of has to do with magic. They just assume that Kate is one as well, but they have no idea what she can actually do. She can know what people are feeling by just delving into their brain, she can pick up on anger, sadness, intrigue, and any other feeling that you may not actually be showing on the outside. She can also pick up on more, but just this gift is where it all starts for Kate and Jarrod. He actually knows when she's trying to find out his feelings. He's the only one who's ever been able to do that. Kate knows that Jarrod has to have magic in him. He practically causes a storm to nearly tear up their science class. He will not believe anything that doesn't go by his rules. He won't believe that his family is cursed, and that's why they have all their bad luck. His arrogance and also how he was kind of cowardly got on my nerves. From the synopsis, and also in the beginning, I didn't think he would be like that at all. Yet, he was. I did like that she switched between Kate and Jarrod, so you got both sides of what was going on. You got to understand why Jarrod was like he was, instead of if Kate was the only one who was telling the story. I really liked part 2. You'll find out why when you read the book, which I suggest you do, cause it is really good. It has magic, it's about the paranormal, who wouldn't love it? To be honest, it's not the best book out there, but it's extremely far from the worse, by lightyears. So go check it out!


Overall I rate this one:


So to all of you who have entered my contest good luck to you, and the winner will be announced on the 12th! Once again, Good Luck!!!

how can i enter/

Ghroob, you can enter by going to my blog fest post and leaving a comment with your email. Thanks for wanting to enter!

Thanks for the giveaway and the opportunity to participate.

I am not sure if I need to enter on this one or the other so i will do both! I am a new follower from blog fest!

Thanks for being one of the blogfest hosts.

I'd love to get my hands on this book! I'm a follower, thanks for the giveaway.

Awesome review, just put me more excited to read it.

Please enter me! Thank you!
mittens0831 at aol dot com

Please enter me in your giveaway! the book sounds interesting. I do like to read about witches!!

Thanks for the giveaway.
dakotasky55 at gmail dot com

This book sounds like a great book and I would love to read. Thanks for the giveaway.

This book sounds like a great book and I would love to read. Thanks for the giveaway.

Please enter me in the contest.
marlenebreakfield(at)yahoo(dot)com

I like books like this, sounds very cool! Thanks for the giveaway! cnjshaw at gmail dot com. I'm a follower.

Thanks for the giveaway!

Thanks for the giveaway!
Please count me in.

o_O I never heard of this book before. It sounds VERY INTERESTING! I must add it to my "to-read" list at once!!