I have been doing this weekly post for a month now. I can tell you I'm amazed i've kept it up. I'm also amazed I've been posting consistently for over five months now. I guess that's something to be proud about. Anyways, this is my weekly post that I do in either on Tuesday or Wednesday to tell you about a book I read before my blog, it is literally on my bookshelf, and is one that I love. I wanted to give you my thoughts on books that I might of not talked about because I haven't read it recently. I have found there are a lot of books out there that I read before my blog, and I may even make this about more than just books that I own. So for this week it's Hacking Harvard by Robin Wasserman. 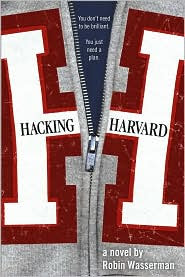 It's the ultimate challenge: breaking into the Ivy League.
The hack:
To get one deadbeat, fully unqualified slacker into the most prestigious school in the country.

The crew:
Eric Roth -- the good guy, the voice of reason.
Max Kim -- the player who made the bet in the first place.
Schwartz -- the kid genius already on the inside...of Harvard, that is.
Lexi -- the beauty-queen valedictorian who insists on getting in the game.

The plan:
Use only the most undetectable schemes and techno-brilliant skills. Don't break the Hacker's Code. Don't get distracted. Don't get caught. Take down someone who deserves it.

The stakes:
A lot higher than they think.

They've got the players, the plot, and soon -- the prize.
It's go time
From B&N

First Paragraph:
This story is not mine to tell.
It is however, true - and I'm the only one willing to tell it.
It begins, like all good stories, once upon a time.

So what's the perfect hack there could ever be, and I do mean hack not prank, no the guys in this book are not pranksters they're hackers, and the perfect hack is Harvard. Tricking Harvard into letting someone in, who by no means would of gotten in other wise is the ultimate hack ever! How easy could it be, all the hackers are geniuses and have done things like put their teacher's whole classroom in the order that it was in the room on the roof of the school. They already have someone on the inside. They also have never gotten caught. Even with all that, it is not an easy feat to fool Harvard. It's the school of choice all over the world. Every one wants to get in, and there are no guarantees. So why would they want to do it, because they can.

I swear this book had me laughing a lot. I couldn't put it down. It was one of those books I saw on the shelf and thought would be something interesting to read, and it sure was. I was one of those people who just kept randomly laughing. The one that annoys every one around them. Yea, I was that person when I read this book. It was all for good reason. I didn't care that my family may have wanted to hit me upside the head with a pillow or throw one of our cats at me. I just couldn't help myself. I'm not saying that you laugh every second you read this book, and maybe some of the things I thought was funny won't be funny to you, but I still enjoyed it. It won't make you cry, so if you need a laugh, or need to learn how to get into Harvard, pick up this book. I liked how the author put in a disclaimer that this by no means reflects how the admission department is at Harvard or any college. She didn't use those exact words, but you get the point. It made me think that since she had to add that that maybe it did show how they maybe were. I may have to make it where I work in the admissions department at college so I can see.

The characters have their own motives for doing this hack. One does it for money, and the others have no idea how much. Max, the guy who makes the bet, bets with some other guys who in no way were ever going to let them win. They try everything in their power to stop them, including adding a twist I didn't expect, but probably should of. It's told from a girl's point a view, Lexi, to begin with, and every so often through out the book, but it also is told from the main hackers too, Max, Eric, and Schwarts. I didn't know whether to think that she was actually telling the story or if they were. It was good anyways. It also talked about if  it was really worth the trouble applying to colleges. If getting into Harvard was worth as much as people thought it was. I only read it a year ago, last summer, and I have the urge to pick it back up just because I'm talking about it. I might, but it is so not like me. I want to find something else like it, but are there any other books about hacking into a college? I don't know. Robin Wasserman was very original if you ask me in writing this book. I am a definite fan of hers. So go check out this book along with others by her.


This ends From My Bookshelf 4. Please go learn how to hack into Harvard.

Email ThisBlogThis!Share to TwitterShare to FacebookShare to Pinterest
Labels: From My Bookshelf, Humor

Loved the post and thanks for the rec on this book, I'd never heard of it before reading your post and I immediately added it to my TBR list, thanks again!

this reminds me a lot of the private series but like the guy version! lol great review girl :)

I love the Private series! Yea, I can see where you got the comparison, it is kind of like that.