So I once again was able to participate in a tour with Traveling Arc Tours. So for this one the book I was able to read was Nocturne by L. D. Harkrader. 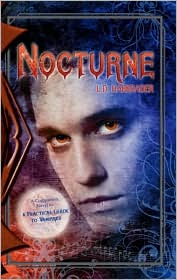 Flanders Lane is tired of being protected by her Uncle Anatole. After years of studying magic in the back of his bookshop, she's ready for an adventure of her own. Then one day, strange things start happening. A burglar breaks into the butcher's shop, stealing nothing, but leaving the floors sparkling clean. Soon the seamstress's apprentice vanishes on her way home, leaving behind only a shoe still laced at the top. And then worst of all, Uncle Anatole disappears. That night, a young vampire hunter named Pascoe knocks urgently on the bookshop door. Pascoe insists there is a vampire lurking in nearby Blakely Hall. Flanders looks deep into Pascoe's gorgeous eyes and finds herself agreeing to help him. As Flanders tracks the vampire, her feelings for Pascoe grow until she stumbles upon a secret that turns everything she thought she knew about Pascoe—and herself—upside down.
From B&N

I was thoroughly surprised by this book. It was a great read, and I didn't want it to end. Flan is the heroine, and has never known her parents. She has no idea where she comes from, but she does know that she has magic. Except her uncle won't let her use it. She was left on Anatole's doorstep when she was baby with a piece of paper with her name on it, and a note that said that she should not use her magic. Flan doesn't listen, and practices magic behind her uncle's back. It's what starts everything. I didn't like that her uncle wouldn't let her use her magic. It's a part of her, a huge part, and she can't help but want to use it. I felt it was wrong that he would keep a huge part of herself from her. I liked how they would use runes to do spells, it was different then what I usually read about witches and wizards. It kind of reminded me of Shadowhunters from The Mortal Instrument series. I was pleasantly surprised by some of this book, but then kind of disappointed with the ending. I can't remember if it's a series, but I think it is. I really enjoyed reading this book, and if there is another book coming out, I can't wait for it.

Generally I don't read vampire books. But this looks interesting