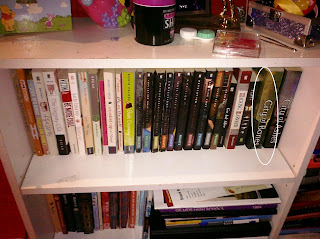 So it's that time again. The time of the week where I tell you about one of my favorite books that's either literally from my bookshelf, or one that I've read a while back that I love. It's something that I've recently decided to start posting about over a month ago, and I post either on Tuesday or Wednesday. Knowing me, I will most likely end up posting late sometimes. So for my sixth installment of From My Bookshelf, it's City of Bones by Cassandra Clare. And once again I tell you that I am not meaning to go in order of how they are on my bookshelf. It just happens. Anyways on to City of Bones


About and Thoughts on Book:
Their hidden world is about to be revealed.... 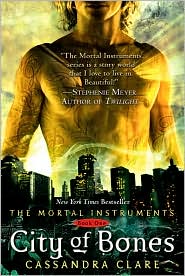 When fifteen-year-old Clary Fray heads out to the Pandemonium Club in New York City, she hardly expects to witness a murder — much less a murder committed by three teenagers covered with strange tattoos and brandishing bizarre weapons. Clary knows she should call the police, but it's hard to explain a murder when the body disappears into thin air and the murderers are invisible to everyone but Clary.
Equally startled by her ability to see them, the murderers explain themselves as Shadowhunters: a secret tribe of warriors dedicated to ridding the earth of demons. Within twenty-four hours, Clary's mother disappears and Clary herself is almost killed by a grotesque demon. But why would demons be interested in ordinary mundanes like Clary and her mother? And how did Clary suddenly get the Sight? The Shadowhunters would like to know....From B&N

First 2 Paragraphs:
"You've got to be kidding me," the bouncer said, folding his arms across his massive chest. He stared down at the boy in the red zip-up jacket and shook his shaved head. "You can't bring that thing in here."
The fifty or so teenagers in line outside the Pandemonium Club leaned forward to eavesdrop. It was a long wait to get into the all-ages club, especially on a Sunday, and not much generally happened in line. The bouncers were fierce and would come down instantly on anyone who looked like they were going to start trouble. Fifteen-year-old Clary Fray, standing in line with her best friend, Simon, leaned forward along with everyone else, hoping for some excitement.
From B&N


So by now I'm pretty sure most everyone out there has read this book or has at least heard of it. If not, than you must of been living under a rock for the past couple of years. I been wanting to talk about this book because I've noticed that many others are. To be honest, I don't own this book, but it is on my bookshelf. Technically it belongs to my twin sis, but she didn't buy it either. She got it for joining Pulse It, which is something that Simon and Schuster publishing does, which she no longer gets books from because she is now 18. They actually stopped sending her books a while back last year, but I don't know why. Anyways, besides the fact that I don't technically own this book, I also didn't ask her to read it. I've done that a bunch of times. Can you blame me? I had nothing else to read, it was just sitting there, she having read it a week before, and the synopsis pulled me in. I had to read it.

It was not what I expected. I had asked my sis after she had read it about it, and she made me think that it was more sci-fi than paranormal. I didn't think vampires or faeries were in it. I can't believe I'm admitting it, but I didn't want to read it when she told me about it. Hence the reason why I read it when there was nothing else. I was so wrong about it. I also didn't expect how Jace or Clary were. I really liked this book. I liked that it involved more than just vampires or faeries. I liked that Cassandra Clare decided to come up with something different and came up with Shadowhunters. Jace and Clary are my favorite characters, and a bunch of what Jace said made me laugh. Simon was another character that I liked. Once again I was that person people around me wanted to throw something at because I would laugh randomly. Close to the end had me wanting to scream, and if you have read this book than you know why.  I read this book a year ago this month. When I read it, my sis and I were the only ones in my group of friends or really at my old school who had read it. I have told many people about it, because of how much I liked it. I also read it pretty quickly because who could put this book down. I can't wait for the prequel and the fourth one to come out, because I'm sure they're going to be good.

So I rate this one LI - I loved it! It's a definite read, and you should grab this book before it goes running off the shelves.

So please go learn how to fight demons from some Shadowhunters.

This is one of my all-time favourites, too! I know what you mean about the end, lol ... I was also like NOOOOO!?! You have to read the next two in the series, though ... I don't know how you're standing the suspense of how it all works out! :)

I Alisha you probably have already won this but I just wanted to let you know I have an award for you here is the link:
http://teenbibliophile.blogspot.com/2010/06/versatile-blogger-award.html

I have read the next two, and I'm glad it works out! I could not stand if it stayed the way it was.

I just finished reading this book and I loved it. I'm all ready to read the second in the series, but sadly, my library doesn't carry it at ANY of their branches! *sigh* Ironically, I avoided spoilers for this one for all this time, only to have someone tell me the surprise at the ending as I was midway through it! Aargh. My own fault, for not reading it fast enough, I guess.