So it's that day of the week again where I tell you about one of my favorite books. From My Bookshelf  is a weekly thing that I do either on Tuesday or Wednesday. Except this was late, sorry. It's tough getting it in on a certain day when I have so many things I have to do. So anyways, it's a post I do to tell you about a book that is from my bookshelf or one that I read a few years ago. So for this one it's Revealers by Amanda Marrone.

Witchin' ain't easy.
Jules has a rebellious streak, a massive crush on Connor, and the abilities of a Revealer witch. By day, she and her coven friends seem like typical high school seniors. By night, they have the power to make werewolves, vampires, and ghosts reveal themselves, so they can destroy them. It's not exactly cheerleading, but at least the girls know they're doing the world some good.
One by one, Jules's friends turn eighteen and are initiated into the coven's inner circle. And one by one, they are getting completely freaked out. Jules is the youngest, and though her friends are too scared tell her what's going on, something's clearly not right. As her birthday approaches, Jules realizes she's got to find out what's behind the shadows of her coven before it's too late to save her friends...and herself. But what she discovers may be too powerful for even the toughest witches to defeat.
From B&N 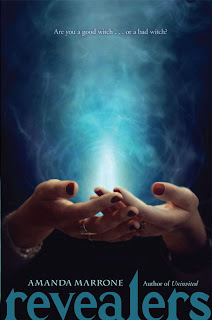 I wake and turn to my window. The witch ball is rattling against the inside of the pane, glowing from a tangled spell within. I wonder which one of my so-called friends threw a hex my way? I watch the spell dance around in the spun glass, and hear the swoosh of brooms flying past, capes flapping. One, two, three soft landings rustle the leaves by the back door. The fourth hits the dirt hard, and I smile, thinking Dani better stop scarfing doughnuts or she won't be able to get off the ground much longer.

I read this book just a few months ago, but still before my blog. It's another book I saw on the shelf that looked interesting and decided to read anyways. Truth is I really wanted to read Uninvited which is also by Amanda Marrone, but the bookstore didn't have it. I expected the same old same old. You know what books about witches are usually like. I guess I expected it to be something easily predictable and not too exciting. I don't know why I thought that. It makes it sound like I didn't really want to read it but I actually did. Anyways it did prove me wrong with most of what I thought, but it made me want to read more books about witches.

I was drawn in from the beginning, and I didn't want to put the book down. Jules and her friends seem like normal teenagers to everyone at school, but that is not even close to the truth. At night they're powerful witches. Jules is the the youngest of her friends, so she is the last that will be initiated into the coven. She is just an onlooker as her friends start acting all freaked out after they're initiated. Jules is not the type of girl who will just wait to find out, she wanted to know before she turned 18. I liked that about her. Jules and her friend, Dani, were my favorite characters. I have to admit, I was not a fan of Conner's. He just seemed all wrong for Jules. In the beginning I didn't see it like that, but later on I realize why.This book has witches, vampires, and werewolves. What's not to like? It upped my obsession of the paranormal, and especially about witches. So I recommend you go check this book out for yourselves. To be honest, I did find some parts boring, and wanted to just skip some, but other than that it's a great book. It's not like I've never found a book that's boring in places. It's hard not to be.


So I enjoyed learning how to take down some vampires and werewolves, will you?

Email ThisBlogThis!Share to TwitterShare to FacebookShare to Pinterest
Labels: From My Bookshelf, paranormal, witches

Strangely enough I felt the same way about this. I wasn't going into ready to be impressed but I was pleasantly surprised by it too. ^.^ I loved the ending, and never saw the little "secret" coming. Overall I was very pleased with it. Good book. XD