So it's that time again. It's time for my weekly post. This is something I decided to do to talk about books that I've either read way before my blog and/or own and are literally from my bookshelf. I do this post either on Tuesday or Wednesday of each week, but I may be late with it sometimes. So for my fifth installment of From My Bookshelf, it's Tithe by Holly Black. If you've been noticing the picture of my bookshelf, it looks like I'm going in order, from Go Ask Alice to Tithe. Honestly this wasn't my intention when I decided on which books to do which week. It just happened. I'm also pretty sure I plan on talking about City of Bones by Cassandra Clare next week. Another coincidence. lol. Anyways on to talking about Tithe.

About and Thoughts on Book:
Welcome to the realm of very scary faeries! 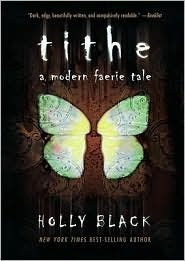 Sixteen-year-old Kaye is a modern nomad. Fierce and independent, she travels from city to city with her mother's rock band until an ominous attack forces Kaye back to her childhood home. There, amid the industrial, blue-collar New Jersey backdrop, Kaye soon finds herself an unwilling pawn in an ancient power struggle between two rival faerie kingdoms — a struggle that could very well mean her death.
From B&N

First Paragraph:
Kaye took another drag of her cigarette and dropped it into her mother's beer bottle. She figured that would be a good test for how drunk Ellen was - if she would swallow a butt whole.

I read this book a year ago in May. It was one of the first books I read that was about faeries. Before then I barely read anything that was about vampires, witches, or faeries. It helped to start the obsession. Well with books about witches and faeries, not really vampires. I actually had never heard of or read any of Holly Black's books until I saw this one on the shelf. I just read the synopsis and felt like it'd be a good read. It definitely was. If I'm remembering right, I read it pretty quickly maybe even in one night. In this book there are plenty plot twists and all the things that go along with reading a good faerie book. I didn't want to put it down.

Kaye had always been different. She use to have friends when she was younger that no one else could see. If I was her I would think something was up. Her friends had wings, and took her places. Maybe she just had a vivid imagination, or maybe not. Everyone else thought she did, but Kaye didn't. She didn't know all about them but she knew some, enough to know that she wasn't imagining. I did enter the world of very scary faeries. How she described some things had me thinking I was there. Some things even freaked me out. I kept wanting to just know what was going to happen right then. Some things were predictable, but that happens in a lot of books, but a lot of it wasn't. After reading this book, I would read other books that also involved faeries and would end up comparing them to this one. I wanted to see if they included the same things, or if they changed it up more. I would find myself  deciding on whether I liked this other author's take on faeries or Holly Black's better. I tended and still do, side with Black. While reading this book, I didn't know there was more to it. I didn't know there was a series. I did know I wanted to read more. I was glad to find out by the end of the book that this was indeed a series. One problem is I have yet to be able to get the third one. I could never find it when I wanted to buy it from a bookstore, which completely sucks. My library only has the first one, which is to be expected that they wouldn't get the rest. Anyways I do know that this is one of my favorite books, and I do plan on getting Ironside soon.

Overall this book would be rated in my rating system, LK - I liked it! It wouldn't hurt you to read it, but it wouldn't kill you if you didn't. I think you'd be missing out on one awesome book if you didn't. That's my opinion and I'm sticking to it.

So will you enter the realm of very scary faeries?

Email ThisBlogThis!Share to TwitterShare to FacebookShare to Pinterest
Labels: faeries, From My Bookshelf, paranormal

I haven't really delved into the faery genre yet, but people keep recommending Tithe to me. Thanks for the review!

have you read the Need Series by Carrie Jones? cz it's very similar to this! I recommend it! It's an easy read too! I have it in my blog if you are interested :)