So I've been in a reading slump lately and haven't been reading a whole lot. I just finished a book for Traveling ARC Tours, so that got me back into the swing of things. So the book I just finished today is Swoon by Nina Malkin.

About and Thoughts on Book:
SIN IS COMING...PREPARE TO SWOON 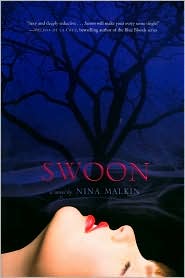 Torn from her native New York City and dumped in the land of cookie-cutter preps, Candice is resigned to accept her posh, dull fate. Nothing even happens in Swoon, Connecticut...until Dice's perfect, privileged cousin Penelope nearly dies in a fall from an old tree and her spirit intertwines with that of a ghost. His name? Sinclair Youngblood Powers. His mission? Revenge and while Pen is oblivious to the possession, Dice is all too aware of Sin. She's intensely drawn to him—but not at all crazy about the havoc he's wreaking.
Determined to exorcise the demon, Dice accidentally sets Sin loose, gives him flesh, makes him formidable. Now she must destroy an even more potent—and irresistible—adversary before the whole town succumbs to Sin's will. Only trouble is, she's in love with him.
What do you do when the boy of your dreams is too bad to be true?
From B&N


Well, what you do is try to stop him. That's exactly what Dice tries to do. It all starts with a tree. There doesn't seem to be anything special about this tree except that it's hundred of years old. But it is the place where Sin was hung, in 1769, for a crime he did not commit. To begin with I found Sin not that bad, and kept waiting for the part where he does something awful when he's possessing Pen. But it does come, and that's when Dice decides that it's time for Sin to go. Except she doesn't get rid of him, she just gives him his own body. I didn't know what to expect after Sin is no longer possessing Pen. I really wanted to believe that he wouldn't do anything that awful. I don't know why I wanted to believe that, probably because Dice wanted to believe it too. I really liked how Dice was and her personality. She's sarcastic, and some things even made me laugh. I didn't really like how everyone had to have a monosyllable nickname. It made it seem like everyone in Swoon just followed what everyone else did and didn't think for themselves. I also thought it weird that Dice was basically left in Swoon to live in her house by herself, and she hardly took advantage of it. I wanted her to explain more about New York, and seem more upset with the move than she acted. I also didn't personally like Pen all too much. That's just my opinion, maybe you'll like her personality, but to me I didn't particularly like all the parts that she was in. So I did actually really like this book, and can even deal with the ending. It feels to me that there should be more to it, but I don't think that there will be. I hate it when books that seem like there should be another book and there's not. It's kind of disappointing. I also think this book is not really appropriate for anyone that is not sixteen or older. It's has a lot of sexual innuendo, but nothing too bad as what's on TV. If you can get past that, then I believe you'll actually like this book.

Email ThisBlogThis!Share to TwitterShare to FacebookShare to Pinterest
Labels: paranormal

Hmmm I have this sitting on my laptop waiting to be read. I thought it sounded really good and the cover was gorgeous. I think I must just accept that love stories involving ghosts or spirits just never work out the way I want them to. :/ I'll still give it a try though. Thanks for the honesty!