Here's another book I've managed to read even with my somewhat busy schedule, it's Almost Perfect by Brian Katcher. 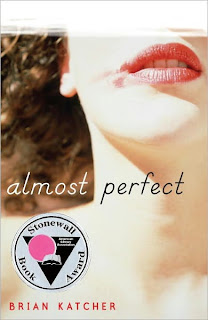 Logan Witherspoon recently discovered that his girlfriend of three years cheated on him. But things start to look up when a new student breezes through the halls of his small-town high school. Sage Hendricks befriends Logan at a time when he no longer trusts or believes in people. Sage has been homeschooled for a number of years and her parents have forbidden her to date anyone, but she won't tell Logan why. One day, Logan acts on his growing feelings for Sage. Moments later, he wishes he never had. Sage finally discloses her big secret: she's actually a boy. Enraged, frightened, and feeling betrayed, Logan lashes out at Sage and sdisowns her. But one once Logan comes to terms with what happened, he reaches out to Sage in an attempt to understand her situation. But Logan has no idea how rocky the road back to friendship will be.
From B&N

Once Logan knows Sage's secret, everything changes. He doesn't know how to act, what this makes him, and sure doesn't want people to know. He thinks the best thing to do is to not be friends with Sage any longer, just cut her out of his life completely. Yet, he realizes that he misses Sage too much for this, and he tries to be her friend again, tries to understand. He doesn't know what this really could mean for them.

I didn't know if I would like reading this book or not, I just felt intrigued to know how someone in Logan's situation would handle it. He acted the way any guy would, from other stories I've heard, he lashed out at her. Tried to think of her as a he, but it didn't work for him, he kept thinking of the Sage he knew, and could never imagine her as a guy. I hated it when Logan lashed out at Sage, acted like he hated her, wanted to hurt her, but it's understandable. A huge secret was just dropped on him, and he had never had to deal with that before. The worse thing that had happened to him to before Sage was Brenda breaking up with him by cheating on him. I felt that Logan was a little naive with his relationship with Brenda. They had dated since freshman year, and he just assumed that they would go to college together. That they would be together after high school. From what he kept saying about her, Brenda never acted like she really liked him that much, but he couldn't see this. He thought he was in love. With Sage it was different, he could tell she liked him, but she couldn't date. So she wanted to be friends, but kept flirting with him. I don't know if she understood what this was doing to him. Then after he finds out, he has to decide whether he can kick Sage out of his life forever or if he wants to understand what's going with her. Why she chose this life, to live as a girl instead of a boy which she was born to be? He finds out how her father sees her, as his boy playing dress up and being a disgrace to him. He starts to understand that Sage needs a friend. Yet things don't always go as you want them to, there's not always that happily-ever-after. I couldn't put this book down once I got into it. Logan's friends added humor to the book, as well as Sage, but you still got that emotional side of when Logan didn't know what to do, how to handle things. He didn't know what would happen to him later on, he just wanted life to go the way he planned, but it hardly ever does. I liked that Logan tried to be there for Sage, tried to get to know her, tried to understand. I wish others were more like this, and didn't have such hatred for people that are different, and want to live their lives a different way than what was planned for them. I can honestly tell you I did feel sad at the end of this book, but also happy. You'll just have to check it out for yourself to understand exactly why.

Wow! I don't think I've ever come across a story like this. It is sad how people act when something is so different then they are use to. This is definitely going on my TBR pile.