This is another book I managed to finish in the week I had off. It's Shiver by Maggie Stiefvater. 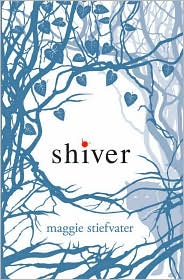 Grace has spent years watching the wolves in the woods behind her house. One yellow-eyed wolf -- her wolf -- watches back. He feels deeply familiar to her, but she doesn't know why. Sam has lived two lives. As a wolf, he keeps the silent company of the girl he loves. And then, for a short time each year, he is human, never daring to talk to Grace . . . until now. For Grace and Sam, love has always been at a distance. But once spoken, it cannot be denied.
From B&N

Grace has a connection with Sam since the moment they meet when she's dragged from her tire swing by his pack. She doesn't know anything about them then, but she knows there's something special about the yellowed-eyed wolf, Sam. The moment they meet when Sam is human, Grace knows they're meant to be together. There's just one catch, one that Same is reluctant to tell Grace. Sam can only be a human when it's warm outside and he won't stay human that long. There has to be some way to keep him human because now that Grace has him, she doesn't want to give him up.

I originally didn't want to read this book. I am not a fan of werewolves stories. So yes that would mean I'm not Team Jacob, but honestly I'm not Team Edward either. I think Taylor Lautner is hot, but it still didn't make me all that into werewolves. To me, a lot of the werewolves stories are the same. You either change during a full moon or when you're angry. You can either be born a werewolf or be bitten and become one. Stiefvater changes it up. Yes these werewolves are bitten to become a wolf, but they change because of the temperature. They're wolves when it's cold and human when it's warm during the spring and summer. But they stop changing back and forth after a few years, the rest of their lives being spent as a wolf. I had never read a book that had it happen like that. It was refreshing. I loved reading every page, not wanting to put it down. I regret not reading it sooner, but at least I don't have to wait forever to read the next ones. It's beautifully written, switching between Grace's and Sam's point of views. They each are great characters. I especially loved Sam. He always had to write a song for everything, and I loved that about him. You fall in love with him just as much as Grace does. You root for their love even though there's a chance it won't work out. Yes this sounds familiar to other books, but don't count it out just because of that factor. It's amazing I ever thought I wouldn't like this book.

I suggest that if you're like me and originally was reluctant to read this book then you should give it a chance. You never know, it could be worth it.

Great review! I'm glad you liked it! I absolutely love this series and can't wait to read Forever. :-)

(By the way,, it's by Maggie Stiefvater, not Richelle Mead)

I can't believe I didn't notice that before. I was also doing a review on one of Richelle Mead's books and must of gotten them mixed up which is a terrible mistake lol.

hey! it's great that you cover all sorts of categories! i've read the first book, but decided to put it down because it was very dragging. :| not much really happened! however i do prefer werewolves than vampires. cz of that protective trait, and damsel in distress. :P but thanks for posting!