It has been probably a year since I've done one of these posts, but I felt like I needed to start it up again. If you just recently became a follower of mine or after I stopped doing these posts, then I should fill you in on what this is all about. This is my own little meme or whatever, where I review books that are literally on my bookshelf or I read way before I started my blog. A lot of those include books from the library or books I stole from my sister. It's suppose to be a weekly post that I either do Wednesday or Thursday, just depending on if I have the time. So to kick this thing off again, I decided to make this one about a book I recently just reread while I was at home for a week break and it's also a book I stole from my sister lol. It's The Truth About Forever by Sarah Dessen. 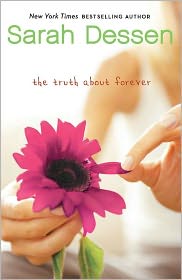 Macy's summer stretches before her, carefully planned and outlined. She will spend her days sitting at the library information desk. She will spend her evenings studying for the SATs. Spare time will be used to help her obsessive mother prepare for the big opening of the townhouse section of her luxury development.
But Macy's plans don't anticipate a surprising and chaotic job with Wish Catering, a motley crew of new friends, or . . . Wes. Tattooed, artistic, anything-but-expected Wes. He doesn't fit Macy's life at all, so why does she feel so comfortable with him? So . . . happy? What is it about him that makes her let down her guard and finally talk about how much she misses her father, who died before her eyes the year before?

First Paragraph:
Jason was going to Brain Camp.
It had another name, a real name, but that’s what everyone called it.
“Okay,” he said, wedging a final pair of socks along the edge of his suitcase. “The list. One more time.”
I picked up the piece of paper beside me. “Pens,” I said. “Notebooks. Phone card. Camera battery. Vitamins.”


Like all Sarah Dessen books, they have a way of pulling you in and not letting you go till you finish it. There's always family drama thrown in with the guy. In The Truth About Forever, it's been a year since her dad died and everyone is dealing with it in their own way. Macy doesn't talk about it with her mother, and pretends to be the perfect daughter. She pretends everything is fine, just fine when all actuality they are not. She already has a boyfriend, Jason, a guy she met when she needed someone to provide a direction for her life. He may not show that he loves her, but she knows he does. That's why she's willing to take over his place at the library information desk even though the girls she'll be working with hate her. When Macy meets the Wish Catering crew, she never imagines she'll see them again. She can't see her life being as chaotic as their job, but somehow after getting an upsetting email from Jason, she runs into them again and starts a whole new chapter of her life. She starts spending her summer differently than how she expected. She still works at the information desk because that is what is expected of her. What's not expected of her is to meet a guy, a guy that doesn't seem anything like a guy she would ever spend her time with. Wes is an artist, unique, and attractive.He doesn't give Macy that look of pity, the look Macy says, is the look everyone gives her once they find out her dad died, and she was there when it happened. The "poor little girl" look. A look that mostly is anything but sincere. He wants to know about her, wants to know why she doesn't run anymore, why she is who she is. So they randomly start playing the Truth game. A game that you can only lose if you lie. Many times it seems like Macy wants to lie, but she finds herself actually talking with Wes. With Wes maybe she can finally learn how to deal with what happened to her father, maybe she can find happiness in the chaotic world of Wish Catering, maybe she can find out the truth about forever.


This was probably the second or third book of Sarah Dessen's that I read. I loved how she would put parts from her earlier books into each one after the one before this, This Lullaby(which I read after the Truth About Forever). You may not notice them before because they could be little things, but in some of them it could be more. I like the fact that in her books you can find yourself relating to the characters in some way. Either in what they're going through or their personalities. I haven't lost a parent like Macy, but I have lost a relative I was really close to. I could understand her pain with that. I always wish I could meet a guy like the one's in Dessen's books, but I know that may not happen, but I can always hope. In this book, I really liked Wes, and he's probably one of my favorite guys from Dessen's books. I reread this book mainly because I had recently read What Happened to Goodbye, and I wanted to remember something about Jason. If you read What Happened to Goodbye, then you will understand what I'm talking about. One of my few problems with these books is that the plot can sometimes be predictable, that she over uses the family issues and finding the right guy scenario too much. Yet her books seem too much like what can really happen, so maybe that's why it seems to be a little overused, or maybe it's just me. I still love reading these books and they tend to be my go to books when  I need a quick read that will make me happy. There also some of the few books I reread.


So this ends my first From My Bookshelf I've done in a while. I hope to keep them coming.


So do you want to learn the truth about forever?

Email ThisBlogThis!Share to TwitterShare to FacebookShare to Pinterest
Labels: coming of age, From My Bookshelf, GA Peach Award nominee, loss