This one's about Stolen by Lucy Christopher. 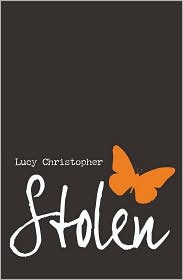 Gemma, 16, is on layover at Bangkok Airport, en route with her parents to a vacation in Vietnam. She steps away for just a second, to get a cup of coffee. Ty—rugged, tan, too old, oddly familiar—pays for Gemma's drink. And drugs it. They talk. Their hands touch. And before Gemma knows what's happening, Ty takes her. Steals her away. The unknowing object of a long obsession, Gemma has been kidnapped by her stalker and brought to the desolate Australian Outback. STOLEN is her gripping story of survival, of how she has to come to terms with her living nightmare—or die trying to fight it.
From B&N

To Gemma, Ty seems really familiar but she doesn't know why. When they meet in the airport, she thinks he's cute and interesting, but something keeps nagging at her about him. Before she can go back to her parents back to the life she's use to, he takes her and makes her live with him in the desert of Australia where no one can find her. Gemma's clever, and tries many times to escape, but like Ty told her she'll only die trying. She thinks it's better than getting killed by him. All she can think in the beginning is that he has some plan to kill her. Then he starts talking, starts telling her things about him, about the world he grew up in, and about how he first met her.

This book is told in the past tense, written as a letter from Gemma to Ty, making you believe that she's escaped, but even with it being like that you are never too sure what's going to happen. Gemma believes that Ty is going to kill her, so she knows there has to be some way out. There has to be somebody else who can save her. There has to be some town close by, people close by. As the days go on, Gemma starts finding the beauty in the place that Ty created, not truly knowing what to feel about him anymore. She doesn't know what to think, did he steal her or save her. This fast-paced novel keeps you on you toes, making you feel Gemma's fear and her wanting to escape. It's a book I was reluctant to put down till the end.
Posted by ALN at 11:33 AM