This is another book I managed to read over my short break. It's Hate List by Jennifer Brown. 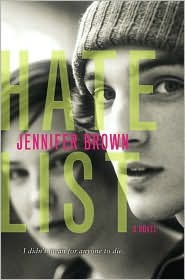 Five months ago, Valerie Leftman's boyfriend, Nick, opened fire on their school cafeteria. Shot trying to stop him, Valerie inadvertently saved the life of a classmate, but was implicated in the shootings because of the list she helped create. A list of people and things she and Nick hated. The list he used to pick his targets.


Now, after a summer of seclusion, Val is forced to confront her guilt as she returns to school to complete her senior year. Haunted by the memory of the boyfriend she still loves and navigating rocky relationships with her family, former friends and the girl whose life she saved, Val must come to grips with the tragedy that took place and her role in it, in order to make amends and move on with her life.
From B&N

What if you created a list of people and things that you hated just to vent, never meaning for it to be used for anything? Never really wanting these people gone, just for them to stop torturing you, and they do stop but not not the way you wanted them to. Instead they die because of the list you made. This is what happens to Valerie. She created this list with the help of her boyfriend, Nick. It was just a way for her to vent because she couldn't stand being around those people. She wanted them to know how much they made her suffered, but she didn't want them to die. Nick thought she did, he wanted them to that's why he opened fire on the school on May 2nd. A few people died, a lot injured, including Valerie. She just wanted it to stop and be over. She just wanted Nick to stop shooting. Some thought she was a hero, others thought she was in on it. She made the list that was used for Nick to pick his target, why wouldn't she be in on it. Now Valerie has to deal with going back to school, with the people who are still there, the ones that blame her, and the friends that ignore her. WIth the help of therapist, Dr. Hieler, he's able to help Valerie come to terms with what happened and learn to cope with it and move on.

This book wasn't like I expected from when I first started reading it. In the beginning it kept jumping from present to past making me not know what all was going on or whether we were in the present or still talking about something that happened a few months before. Valerie is still hung up on Nick. In her mind, he's still the guy that she met freshman year, who showed her his love for Shakespeare and understood what she was going through with bullies at school and her family problems. He's still the boy who got what she was all about. Valerie thought she knew Nick that she understood him, but maybe she was wrong. I found the scenes with the parents kind of frustrating. They were going through their own problems before the shooting happened, and now after the shooting they seem to be making it be the thing that caused everything. Valerie's Dad in my opinion is a complete jerk, but maybe that's just how he had to deal with things by trying to stay away from Valerie for a while. I don't think he got that she needed someone there for her. She did have that in her therapist, who managed to get her to talk about things on her own on her own time. When she first goes back to school, she does get those stares and even one girls drops out of school because she can't stand to be around her. The girl she saved, Jessica, tries to be her friend. At first you don't know if it's genuine or not, but later on you find out that she's trying to get to know Valerie. There are newspaper articles at the beginning of the first few chapters and a few of the last ones. Letting you know what others thought of the shooting and that they thought the school was a better place now, which wasn't true at all. They wanted it to be, but you learn in this book that people don't always change even after they go through a tragedy. Some people will always be the same. Valerie definitely changes. One part of the book is a flashback to the shooting to what Valerie thought was happening, to what she thought was going on with Nick. You get to understand Valerie and feel her pain. She can't decide if she's a hero or a villain. Some days she thinks both, some days neither. She never thought she would go through something like this and now she doesn't know how to deal with the aftermath. This book will pull you in, you'll understand what Valerie's going through, you'll feel like you're there in her life, during the shootings, and during everything afterwards. A great book that teaches you not everyone changes when faced with a tragedy, but some people do grow and change for the better. Yhat this will always be there, but you can move on.
Posted by ALN at 12:16 PM