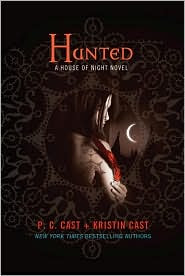 Just finished reading Hunted by P.C. Cast and Kristin Cast. I have been reading it for a while now, but I've also put it down to read other books. I just could not get into this one. I finally did though, and finished it in no time once I got to the good parts of the book.

About and Thoughts on Book:
In the fifth book of the House of Night series, Zoey has her friends back again, but she also has an immortal evil being to deal with. Stevie Rae and the red fledglings are no longer a secret. Zoey, her friends, and the red fledglings have been force to hide from Neferet and this new evil. But they can't stay hidden forever, and they may just have to go back to the place they are trying to stay away from.

I liked this book, but I liked the ones before it better. I wish they'd add more to the action scenes, or have more action to it. I mean it's about vampires, it has to have some kind of action. I also wish Heath would be out of the picture. If you have read the books and agree with me, then you know what I'm talking about. I actually like Stark better than Heath or Erik. Maybe it's just me, I don't know. I at least have the next book, so I can find out what happens with all this sooner than later.

I really wish I had the next book in the Sweep series. I want to read that one more than any other book.
Posted by ALN at 12:27 PM

I like stark better than Erick and Heath too. :)