This one is Almost Home by Jessica Blank. 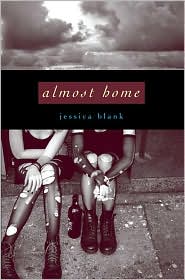 Why would anyone choose to live on the streets?
There is Eeyore, just twelve years old when she runs away from her privileged home, harboring a secret she's too ashamed to tell anyone. Rusty is a sensitive gay teen who winds up alone when his older boyfriend ditches him in Hollywood. Squid has gone through too many foster homes to count. There's Scabius, a delusional punk from Utah who takes the "me against the world" motto to dangerous extremes. And Critter is a heroin dealer with movie star looks and a vulnerable heart. Laura should be home studying, but she can't face another one of her mom's boyfriends.
And then there's Tracy, the damaged thread that ties them all together, irrevocably changing each life she touches.
This unlikely band of characters form their own dysfunctional family, complete with love and belonging, abuse and betrayal. Each will make their way home, wherever it may be.
From B&N

So each person in this book has their own reason for living on the street. Each no less important than the next. They don't know each other, but some how they each come to know the same person at different times. Tracy is the one that is in everyone's story, except for Squid's but he still meets her later on. She takes from them and never seems to give anything back, yet somehow she changes every one of their lives. This is a powerful book that will change your perspective on the world. It shows you that the world is not perfect and not in the way that someone may have this problem with a guy or their face. No it's way more than that. It tells you what it's like for kids out on the street and how hard it is. I know most people already know that it's hard living on the streets, but you don't truely know if you haven't lived there yourself. This book gives you that insight. Even though the characters are all fictional, you know there are kids out there going through this right now. Their lives don't end when the book ends, they still have to live with maybe no happy endings.
This book reminds me a lot of books by Ellen Hopkins. It's just as powerful and thought provoking as hers. This book is amazing and a need to read. It's not like every book you would pick up off the shelf.