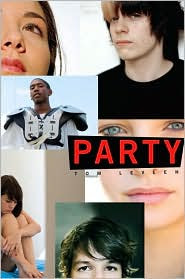 It's saturday night in Santa Barbara and school is done for the year. Everyone is headed to the same party. Or at least it seems that way. The place is packed. The beer is flowing. Simple, right? But for 11 different people the motives are way more complicated. As each character takes a turn and tells his or her story, the eleven individuals intersect, and reconnect, collide, and combine in ways that none of them ever saw coming.
From B&N

So this is one of those books I read a preview of on B&N and just had to finish reading. Partly because they ended the preview in the middle of a chapter, and partly because it sounded like one good book. It held true to what it says. I didn't expect what happens between each character. It's told from eleven different view points, with most ending with a cliffhanger. I must say that got on my nerves, especially Beckett's chapter. Her's is the one that leaves you with the most questions. Hers only talks about herself mostly and you don't really get what happens at the party with her. It makes it where you have to read more to get all of it.

From the title you get what's it about, but it's not just about a high school party. Yes there is underage drinking, someone does end up drunk, sex, and of course a fight. Yet that is not the entire story. It's more about what's going on with the eleven teenagers that tell this story. Some of the chapters I felt were just there to explain about a more important character that may have yet to come up or like with Beckett, just didn't tell you a whole lot. I liked this story, but I felt like I had read something like it before. Even with that said, I still thought it was a really good read and anyone who wants to should definitely check it out.