So I haven't been reading a lot lately. I am really ashamed of myself. Yet, I did manage to finish this book in just one night, so I've proud of myself for that. So this one is the new one by Elizabeth Scott called The Unwritten Rule.

About and Thoughts on the Book: 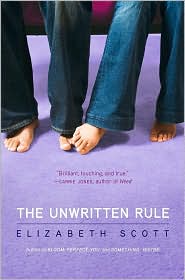 Everyone knows the unwritten rule: You don't like your best friend's boyfriend.

Sarah has had a crush on Ryan for years. He's easy to talk to, super smart, and totally gets her. Lately it even seems like he's paying extra attention to her. Everything would be perfect except for two things: Ryan is Brianna's boyfriend, and Brianna is Sarah's best friend.
Sarah forces herself to avoid Ryan and tries to convince herself not to like him. She feels so guilty for wanting him, and the last thing she wants is to hurt her best friend. But when she's thrown together with Ryan one night, something happens. It's wonderful...and awful.
Sarah is torn apart by guilt, but what she feels is nothing short of addiction, and she can't stop herself from wanting more...
From: elizabethwrites.com

So like the book says, every girl knows the unwritten rule: don't want your best friend's boyfriend. Except, Sarah can't control how she feels. Avoiding Ryan doesn't work for her, Brianna keeps making her hang out with them. Brianna has been Sarah's best friend since kindergarten. From what I got from the book, Brianna tends to say things that are meant to be helpful, but they end up just hurting the person she tells them to. It is mostly Sarah she says these things to. I felt Sarah should of said something to Brianna, but it never seemed like she would. She felt bad for Brianna because her mother did the same thing to her, but Brianna never realized that she was acting like her mother. Brianna's parents wouldn't show Brianna love and were hardly around, and Brianna thought it was her fault and that she had to force people to love her. I couldn't believe her parents. How could they treat someone the way they did?

Now, Ryan just seemed like the perfect person for Sarah and not Brianna. Brianna got him because she seemed so sure of herself around guys. Brianna is the girl every guy wants. They are even willing to pretend to like Sarah to be around her. I can't believe Brianna would let this happen. She keeps telling Sarah that she should find a freshman that is willing to date her. Seriously! A freshman who is willing to date her? She doesn't realize how that sounds to everyone else. It doesn't really give her an excuse, though. I didn't see why she would say that at all. Ryan and Sarah have a lot more in common than Brianna and he does. They both like the same things, like art. Sarah is always making designs on her shoes, and Ryan is an amazing artist. I didn't like that he decided to go out with Brianna, even though he seemed to like Sarah from what I got from the book. I thought one of them should of told the other one how they felt before anything with Brianna and Ryan happened. I didn't expect what happens in the end, but I liked it. This is a really good book, just like Elizabeth Scott's other books like Bloom and Perfect You. If you liked those, you'd like this one as well.