So this is a weekly post I do either on Tuesday or Wednesday. It's something I started to talk about books I own, love, and might not have reviewed if not for this little feature on my blog. I normally just review books I've recently finished, but I have a lot of books I've read before my blog that I think people should know what I think about them. So for my third installment of From My Bookshelf, it's Go Ask Alice by Anonymous 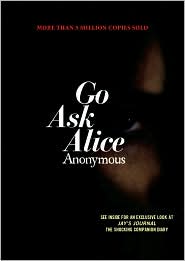 January 24th, after you've had it, there isn't even life without drugs....It started when she was served a soft drink laced with LSD in a dangerous party game. Within months, she was hooked, trapped in a downward spiral that took her from her comfortable home and loving family to the mean streets of an unforgiving city. It was a journey that would rob her of her innocence, her youth -- and ultimately her life.Read her diary.Enter her world.You will never forget her.
From borders.com

First Paragraph:
September 16
Yesterday I remember thinking I was the happiest person in the whole earth, in the whole galaxy, in all of God's creation. Could that only have been yesterday or was it endless light-years ago? I was thinking that the grass had never smelled grassier, the sky had never seemed so high. Now it's all smashed down upon my head and I wish I could just melt into the blaaaa-ness of the universe and cease to exist. Oh, why, why, why can't I? How can I face Sharon and Debbie and the rest of the kids? How can I? By now the word has gotten around the whole school, I know it has! Yesterday I bought this diary because I thought at last I'd have something wonderful and great and worthwhile to say, something so personal that I wouldn't be able to share it with another living person, only myself. Now like everything else in my life, it has become so much nothing.

When I first read this book, I couldn't get into it. I had checked it out from my library, but was busy reading something else for school, so I returned it. I went back to check it out, and it wasn't there. When I searched it, it said that it was lost, and I had just seen it there a few days before. But this is my library I'm talking about, they seem to always manage to lose a book every so often. So I bought it, and I'm glad I did (My library surprisingly found it after I had bought it).I have no idea why I put this book down. It is simply amazing and so real. Not what I expected. I read it in April 2009, over a year ago, but I still remember it pretty well.

In the beginning, she's a just a normal girl. She just has problems at school, and with friends and her family. She's not addicted to drugs in the beginning. No that doesn't happen til later. After she gets addicted to drugs, the diary entries become different than they were in the beginning. I got the the reason for the title after she mentions how she realized how Lewis Carrol must of felt in one of her entries. My sister usually says Lucy in the Sky with Diamonds, when she talks about LSD because of The Beatles song. I didn't realize how much this book would affect me. It's so powerful, and it's someone's honest words about her addiction. Even not knowing the person's name, does not change the affect it has on people. I think it being by someone anonymous drew me in more to read it. I have heard that this book is being banned in some places, and that is such a shame. If they would just let kids read it, it might change some things for them. I think it's just awful to ban a book because they don't agree with what it's about. Hello! There are shows and movies out there about he same thing. You can't stop someone from reading a book. I say go out and buy it, and see for yourself whether or not you think it should be banned because I don't think it should. People will be missing out on one amazing book, if everyone decided to ban it.

Email ThisBlogThis!Share to TwitterShare to FacebookShare to Pinterest
Labels: drugs, From My Bookshelf